Is trouble brewing in the Indian team between coach Anil Kumble and senior players led by captain Virat Kohli? Sources say Kohli and some other players arent happy with Kumbles way of guiding the team.

Virender Sehwag was reportedly asked to apply but refused

Virat Kohli was not comfortable with the idea of working with Anil Kumble on a long term basis. (TOI Photo)

NEW DELHI: Is trouble brewing in the Indian team between coachAnil Kumbleand senior players led by captainVirat Kohli? Sources say Kohli and some other players arent happy with Kumbles way of guiding the team.

The news comes at a time when India is preparing to take on Pakistan in its opening match of theChampions trophyon June 4. Indian crickets Big Three ­ BCCIs advisory panel ofSourav Ganguly,Sachin TendulkarandVVS Laxman­ will now be expected to broker peace between Kumble and Kohlis men. The advisory committee has been entrusted with the job of naming the next India coach. Kumble was considered the front-runner for an extension till the 2019 World Cup, with Team India having won everything under him in the past one year. So, what has suddenly gone wrong?

It is believed that Kumble being a hard task-master has not gone down well with the seniors. There is no serious crisis as yet, but sources say players were happier withRavi Shastris style of working. 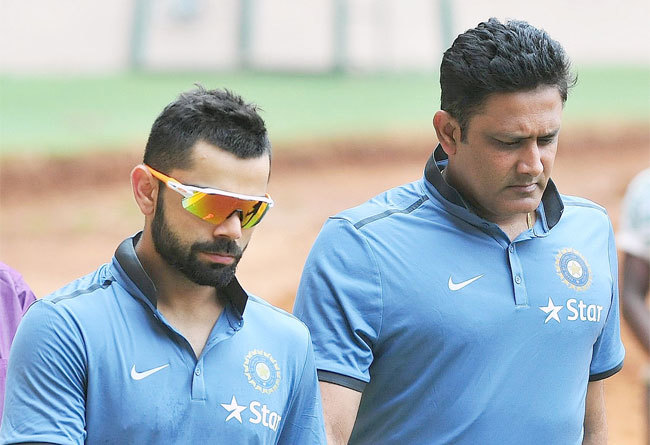 It is understood that Vinod Rai, chairman of the Supreme Court-appointed Committee of Administrators (CoA), is likely to meet the three-member panel to discuss the issue.

Sources said Kohli had a word with Ganguly after the practice game against New Zealand on Sunday and may have discussed the issue at length.

It is learnt that a certain section of BCCI was in favour of extending Kumbles contract earlier, but a board functionary told them that Kohli was not comfortable with the idea of working with Kumble on a long term basis.

Kumbles contract was ending after the Champions Trophy and the board went ahead with the process of finding the coach rather than give Kumble a contract extension. Of course, Kumble has been automatically made a part of the process.

With the CoA not involved in the day-to-day working of the team, the responsibility of naming the new head coach is entrusted to the three-member panel. Neither the CoA not the board officials will be part of this process, a source in the know said. 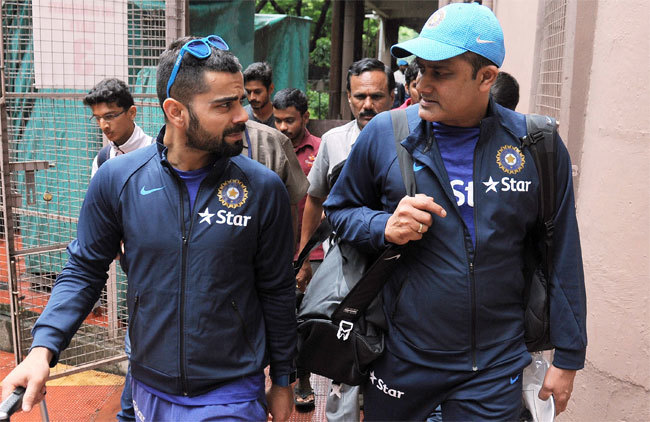 Virender Sehwag was reportedly asked to apply but refused. The focus shifted to Ravi Shastri, but he has also not shown interest in applying for the top job. Sources say AustraliasTom Moodycould be a possible applicant again, but a section in BCCI wants Rahul Dravid to apply for the job. There is, however, no development on that front either.

Hence, the CoA has asked the advisory panel to sort out differences between the coach and the players.

The question being raised in cricket circles is: What is wrong with Kumbles method? Sources say Kohli and Kumble had a difference of opinion over several issues related to the playing XI during the India-Australia series.

In the last Test in Dharamshala, which India won, Kumble had strongly backed the inclusion of chinaman bowler Kuldeep Yadav in place of the injured Kohli. Sources say Kohli was unaware it and was caught by surprise.

Kohli, who now captains the team in all formats and has emerged more powerful than ever, had wanted Shastri to continue, but the board did not pay heed to his request. The top BCCI management could have ignored Kohlis concerns again, but other senior cricketers in the team say the feel good factor is missing under Kumble.

BCCI:A section within the board has reportedly been unhappy with Kumble over his closeness to the Lodha panel and the CoA-Kumble has been talking directly with CoA chief Vinod Rai over player and coaching staff salaries. He even asked for a substantial hike in the wages which again didnt go down well with some BCCI mandarins. While the BCCI is not directly in the picture in this affair, the chances of some of them playing bit roles in the matter cant be ruled out.

CoA:The Supreme Court-appointed committee has been backing Kumble but is worried over the rift between the coach and players. The CoA feels that it will be difficult for the coach to continue if the team does not have confidence in him.

Cricket advisory committee:The panel consisting of Tendulkar, Laxman and Ganguly had chosen Kumble as coach last year. It will against be asked to select a new coach, or give Kumble an extension, after the Champions Trophy which ends on June 18. Sources close to a member of the panel had suggested to TOI that the CAC would continue to support Kumble. But will it be able to ignore the gathering storm?

Anil Kumble:The legendary leg-spinner has courted success as coach too but has fallen out with some players over his overbearing personality. As a player, Kumble was a tough competitior but always dignified and let the ball do all the talking. Its yet not known what exactly made the players turn against him. But its been a surprising turn of events.

The players:Apparently, captain Virat Kohli has fallen out with Kumble which makes the coachs position shaky, given Kohlis clout and position in the team and Indian cricket. There are others in the team who may not be thinking too highly of the coach.

Refrain from posting comments that are obscene, defamatory or inflammatory, and do not indulge in personal attacks, name calling or inciting hatred against any community.Help us delete commentsthat do not follow these guidelinesby marking them offensive. Lets work together to keep the conversation civil.

JER tied with GGY (JER win Super Over by 2 wickets)

Heres why you should NEVER wash chicken before cooking

We are very balanced and strong as a side: Virat Kohli

No outcome from PCB meet; BCCI unlikely to pay compensation

No outcome from PCB meet; BCCI unlikely to pay compensation